We have recently published a manuscript entitled “On the hydration of DOPE in solution” in collaboration with Sylvia McLain’s group at the University of Oxford.  In this manuscript, we utilise neutron diffraction and NMR experiments alongside Empirical Potential Structure Refinement (EPSR) and atomistic molecular dynamics 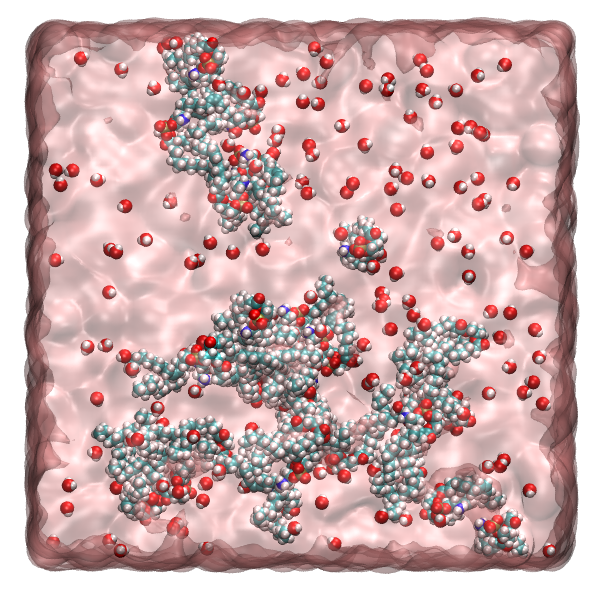 simulations to gain a state-of-the-art understanding of the hydration of the phosphatidylethanolamine (PE) lipid headgroup.  PE lipids are one of the most common types of lipid headgroups found in human cells, making up approximately 25% of all phospholipids.  They are found at even larger fractions (~45%) in the cells that make up mammalian brains, and therefore the blood-brain barrier.

The PE headgroup is zwitterionic (containing a positively charged ammonium group and a negatively charged phosphate group) like the other commonly found phosphatidylcholine (PC) headgroup.  However, the ammonium group in the PE headgroup results in this headgroup having the capability to be involved in forming hydrogen bonds with neighbouring lipids and with the water surrounding it.  Also the PE headgroup is smaller than the PC headgroup, and as a result the PE lipids are reported to have a conical shape in a membrane, as opposed to the cylindrical shape that PC lipids have been found to have.

The interaction of water with lipid headgroups is generally of interest as the hydration of the lipid membranes has implications for disease control and cellular signaling.  The interface between this hydrophilic environment with the hydrophobic membrane interior is where these interactions occur in vivo.  Previously we have investigated the hydration of the PC and ceramide lipid headgroups.  In our latest manuscript, we were interested in understanding the hydration of DOPE due to its implications for drug delivery, particularly delivering drugs across the BBB where PE-phospholipids are found in a relatively high proportion.

Our results show the preferential binding sites for water molecules on the DOPE headgroups, with the most predominant interactions being with the ammonium and phosphate groups.  Our results suggest the presence of a tight water network around these lipid headgroups that could affect the permeability of the membrane for lipid-mediated diffusion.